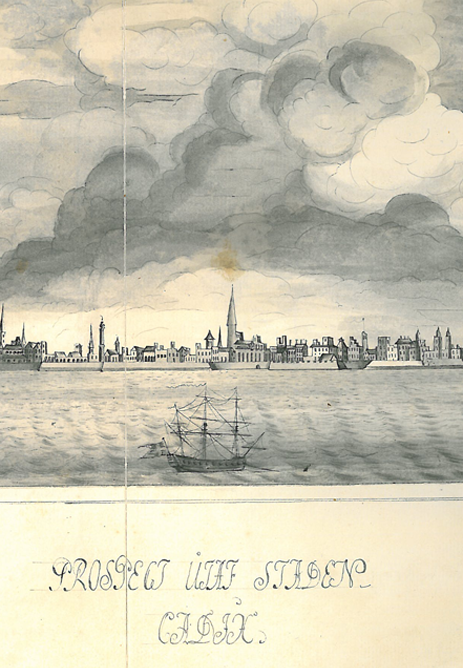 The town of Cadiz in southern Spain, from manuscript X 389

Uppsala University Library holds a number of manuscripts on the subject of trade, or Swedes’ voyages abroad, providing information about the Swedish East India Company. Some of these have been digitalised as part of a project initiated by Gothenburg University Library.

ABOUT THE SWEDISH EAST INDIA COMPANY

The Swedish East India Company was modelled on the great English and Dutch East India companies. The profit-making company was based on monopoly sales of goods from the East Indies, such as spices, tea, silk and porcelain.

The Swedish company was founded in 1731 and operated until 1813, based originally in Gothenburg and during its final years in Stockholm. The company’s ships transported metal goods from Sweden. These were exchanged in Cadiz for Spanish silver piastres, which were negotiable in China. The route then led via the Cape of Good Hope to the city of Canton in China, where the Swedes had a factory. The ship spent four to five months in Canton before sailing back westwards. With the wind in the right direction, the return voyage to Gothenburg took six months. There, the valuable luxury goods were sold at auction at the company’s warehouses.

The Section for Manuscripts and Music at Uppsala University Library are happy to assist you with your searches. You can request a document and study it the same day, here in the Special Reading Room in the Library.