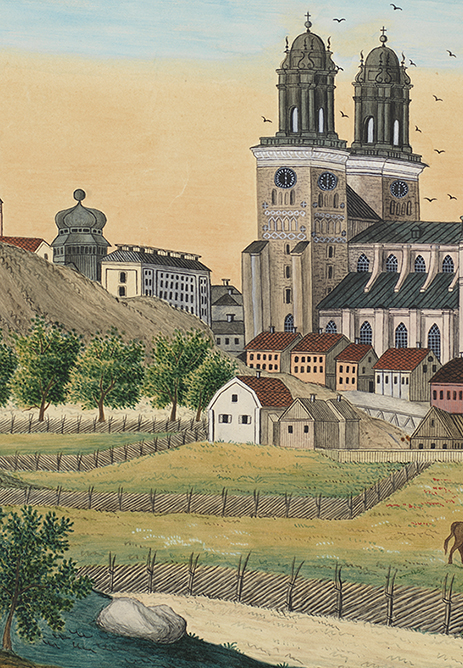 The Library has extensive collections of pictures including engravings and lithographs, drawings, postcards, photographs and printed pictures. The subject-matter is mainly portraits, topographical views and historic events.

The collections have been built up since the 17th century through donations, legal deposits and purchase. A small part of the picture collections are searchable online in Alvin, platform for digital collections and digitised cultural heritage.

The Library's considerable collection of Swedish posters from the 19th century to the 1960s span a whole period of Swedish cultural history and development. We have only a small selection of Swedish posters from the 1970s onwards, which however includes information about important events and posters that are connected with specific individuals. Questions about other posters should be directed to the National Library of Sweden.
At present, searches for posters can only be done using the year and place where they were printed.

Charts is a term that has been used collectively for various kinds of pictures irrespective of techniques or categories. It is still used for the large topographical, historical, cultural-historical and art-historical picture collections. There are roughly 100,000 charts in these subjects.

Wall charts with pictures summon up a certain way of teaching in schools. We own a representative collection of 20th century Swedish school and educational charts. Some of these school charts have been used at the Teacher Training College in Uppsala.

Collections of negatives from several well-known Uppsala photographers are held in our picture collections:

The collections contain examples from the infancy of modern printing up to our own days and they cover various motifs: scenes from everyday life, topographical views, historical scenes and portraits. We have examples from the 15th century of large prints from woodcuts to copperplate, steel engravings to 19th century colour lithographs. In the collection we have items by both foreign artists (e.g. Albrecht Dürer, Rembrandt, Andrea Mantegna, Claude Mellan, Jacques Callot, Antonio Tempesta) as well as Swedish artists (Elias and Johan Fredrik Martin, Anders Zorn etc.).

There is a catalogue for the collection of engravings and parts of the lithographical collection at the Special Collections Division.

The collection is undergoing digitisation, and more and more drawings are available in digital copies: Drawings at Uppsala University Library. This digitisation was made possible by means of a generous donation from antiquarian dealer Per Karlsson, Stockholm.

Some parts of our collections are available in digital form:

How did the drawings arrive at the Library?

The large collections of watercolours, tinted drawings, lead pencil and charcoal drawings, etc. mainly arrived at the Library during the 19th century through a number of donations. Two of the more significant donations, which constitute the foundation of the drawing collection, were from Major-General Carl Hård and Jacob Westin, Master of the Guild of Tanners. Hård’s donation (1834) contained more than 4,000 Swedish drawings and just under 500 foreign ones. The number contained in Westin’s donation (1877) is difficult to say, but they were part of the 68 portfolios of “maps, views and drawings of Sweden”, and 28 portfolios of portraits of Swedes, which together with other map and image material probably contributed to a separate department “Map and Chart Department” being founded at the University Library in the early 1900s.

The most famous of our drawings is a small and, at first glance, unimportant drawing that is usually called Courtiers from Geldern or the Silver Pencil Drawing. Another example from the collections is the so-called Deposition Act, an initiation ritual that the students were forced to carry out in the 17th century. In today’s use of language, “deposition” would equal ragging. Some examples from the drawing collection are on display in the Exhibition Hall of Carolina Rediviva.

The Swedish drawings are registered in a printed catalogue up until and including the acquisition year 1958:

Please contact Ask the Library if you are looking for portraits. The portraits are registered under the name of the sitter in a card catalogue at the Special Collections Division.

In our picture collections we have a large number of Swedish and foreign views of towns and countryside as well as exteriors and interiors of various buildings. The collection comprises around 100,000 pictures using different techniques (engravings, water colours, photographs etc.).

Some of the views can be seached through place name in Alvin - platform for digital collections and digitised cultural heritage.

The University Library has extensive collections of postcards. The largest category is postcards depicting various places and sites in Sweden, i.e. topographical subjects. The collection contains very many postcards with historical, cultural-historical and art historical motifs as well as topographical views from other countries.

The collection of postcards at the University Library has been built up by legal deposits and donations.