More about The Library´s History

When Uppsala University was founded in 1477 there was no university library. Professors and students alike probably had access to the cathedral's books. There were one or two private books around, but they were far from common. Knowledge was acquired via professors' lectures, to which students listened and took notes. 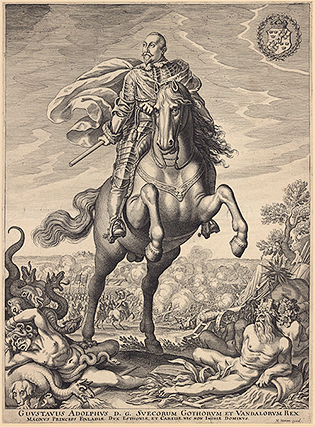 The University Library was founded in 1620 by King Gustav II Adolf. It also received its first donation that year. The King presented the university with the book collection that had been housed on Gråmunkeholmen (the island of the Franciscan or Grey Monks) in Stockholm. It included the remains of the medieval monastic libraries and some confiscated private libraries, such as King Sigismund's and that of Hogenschild Bielke, a privy counsellor who was executed in 1605.

This formed the foundation of Uppsala University Library, which was also granted 200 Swedish daler annually, an amount which was raised to 300 daler in 1621.

One of the professors was allotted the task of librarian and a building was eventually found to house the collections. It was near the cathedral but no longer exists, except as part of another building.

In the 1620s, the King increased his donations with a significant amount of war booty amassed during his wars on the continent. This is, for example, how the Jesuit libraries in Riga, Braunsberg (Braniewo) and Frauenburg (Frombork) landed in Swedish hands. In the 1630s the Swedes campaigned in southern Germany and the book collections they acquired in Würzburg, Mainz and other places were sent in part to Uppsala.

Queen Christina favoured Stockholm rather than Uppsala with books, as did her courtiers, such as Magnus Gabriel De la Gardie. Large parts of his library eventually ended up in Uppsala in various ways. 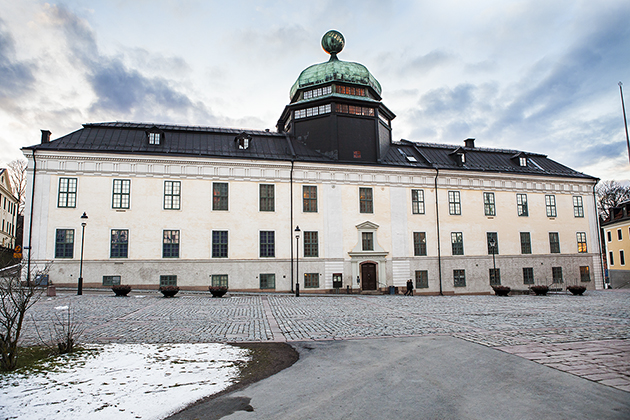 In 1692 and 1707, laws were promulgated to enforce printing houses in Sweden to deliver one copy of every publication to libraries, at first only to the Royal Library (now the National Library of Sweden), but later also to Uppsala University Library and other libraries. These legal deposits had no great impact initially, but gradually and with the help of subsequent similar laws, they became the Library´s single most important acquisition method.

Eric Benzelius the Younger was the university librarian from 1702-1723. His term of office was one of the greatest in the history of the Library, not least as far as acquisitions were concerned. The growth during his time consisted largely of manuscripts. One of the most important donors was the linguist and diplomat Johan Gabriel Sparfwenfeld, who presented the library with valuable books, manuscripts and maps at various times.

In 1767, Crown Prince Gustaf (later Gustav III) donated privy counsellor Jacob Cronstedt's library to the university. Cronstedt's book collection had been acquired by the parliament expressly for the Crown Prince.

Pehr Fabian Aurivillius' term of office, like Benzelius', was an important period in the development of the Library. Aurivillius was the university librarian for 42 years, between 1787 and 1829. He had numerous accomplishments, especially the extensive catalogue of the Library's holdings, which is still in use. During Aurivillius' time, the collections became considerably larger. The library acquired approximately 4,000 volumes from Johan Henric Lidén's collection, mainly academic theses. In 1788 Gustav III decided to gift his private archives to Uppsala University Library, with the proviso that they should be made accessible first 50 years after his death – in the long term a highly significant source for research.

In 1841 the University Library moved into the newly built Carolina Rediviva, which also functioned as the university's main building. The great "Carolina Hall" became the university's ceremonial hall which was approached by a magnificent staircase.

Carolina Rediviva means "the revived Carolina Academy" and refers to an older university building, Academia Carolina, which was demolished in the eighteenth century. The name can also be seen as a minor tribute to King Karl XIV Johan (Carolus Johannes), who determined the site of the new building when he was Crown Prince.

By this time the Library's holdings had increased to over 100,000 volumes. Under Johan Henrik Schröder, the librarian between 1830 and 1857, the library received a number of important donations. Perhaps the best known is the Carl Gustaf von Brinkman library, with around 22,000 volumes.

At the time of Uppsala university's 400-year centenary in 1877, the alderman, tanner and book collector Jacob Westin of Stockholm made the largest donation to date in terms of numbers of books, when he donated his library, which comprised approximately 20,000 books and a great number of pictures and manuscripts.

Claes Annerstedt's time as library director (1883–1904) was a period of great expansion for the university library. The new main university building, the University Hall, had been completed, leaving Carolina free to be used solely as a library. Extensive renovations ensured new storage space and a more modern working environment with lifts, central heating and so on. A thorough inventory of the Library's holdings was conducted in 1886, revealing that the number of volumes had reached 230,000.

In 1895, Annerstedt managed through intensive and partially hidden lobbying to effect, after a long and stormy debate in the parliament, a doubling of the grant to the library. New international agreements on the exchange of publications were established increasing the holdings further. This activity would flourish for over a hundred years. Swedish printers delivered one copy of all their publications with regularity like never before. By the end of his term of office, Annerstedt calculated that the University Library held 341,911 volumes or 13,741 metres of shelves of books and other items - an enormous increase. However, the twentieth-century publishing explosion would generate increases of a different calibre: just one century later, the length of shelved items had increased tenfold.

In the early twentieth century, the Library expanded further with several donations including the Wahlund Library, "Bibliothèque Wahlund", in 1913, which consists mainly of Philology of the Romance languages, but the truly great golden age came in the 1950s. A series of important book collectors donated their collections to the Library: Erik Waller, Richard Du Rietz, Thore Virgin, Gustaf Brun, Erik Kempe, Gustaf Bernström, Vilas Johnson and several more.

Even after the 1950s, magnificent gifts have been made to Carolina, a few of which are particularly worthy of mention. One is Nils Bonnier's generous donation of artistically bound books, many of which have enriched the Library's excellent collection of book bindings. The other is a donation from Katarina Crafoord who was largely responsible for the University Library being able to acquire the manor house library at Leufsta, a unique eighteenth century collection assembled by the industrialist, zoologist and baron Charles De Geer.

But the growth of the University Library’s collection during almost the entire twentieth century had its downside: lack of space. By no means the Carolina building could house everything, and a system of external book repositories was established. The enactment of the new Law of Legal Deposits in 1980 brought changes that eased planning somewhat.  University libraries in Sweden would continue to receive all Swedish publications, but would no longer (with the exception of Lund University Library) be required to save items they considered unnecessary.

For many years Carolina Rediviva, or just Carolina, was synonymous with Uppsala University Library: the building housed the Library. The university's various departments were in central Uppsala and the Library presided above the town. In the second half of the twentieth century, this image fractured slightly. New campuses were built, not all of which were in town. Some of the library services, book and journal collections were relocated here and there in the buildings where the daily activities of the university took place. New organisms such as departmental libraries, seminar libraries, and faculty libraries, began to appear with no consistent organisational framework.

In the 1970s and 80s, a system of a central library in Carolina and various branch libraries had evolved. The organisation today is quite different but the system of subject libraries is still in place. There are now a number of subject libraries in different parts of Uppsala. The Carolina building is home to one of the libraries for humanities and theology, but also contains the university library's cultural heritage collections: manuscripts, maps, pictures, early prints etc.

Enormous parts of Uppsala University Library's collections are now digital. The collections can no longer be described in terms of metres of shelved material. Even though the paper-based collections are still with us and continue to increase, the digital collections are growing exponentially. As far as the cultural heritage material is concerned this affords exceptional opportunities for both improved accessibility and better protection of the original materials. As for the provision of information in general, the electronic development is a revolution bringing great benefits in the form of availability, space-saving and distribution.