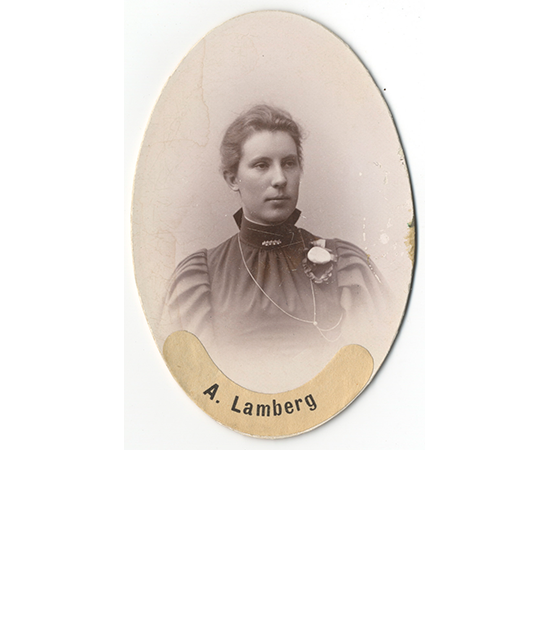 In autumn 1899, Anna Lamberg was appointed as sub-librarian at the Uppsala University Library, becoming the library's first female employee.

Anna Lamberg and the University Library

Anna Lamberg was born in Kalmar in 1877 and joined Uppsala University in the autumn semester of 1896. She had conducted a great deal of her studies abroad, spending the autumn semester 1898 at Berlin University and the spring semester of 1899 in London. She received her Degree of Bachelor of Arts in 1899 and was employed by the library in the autumn of the same year, “an appointment, which no Swedish woman had held” according to the publication IDUN, number 41, 12 October 1905. Anna stayed at the library until 1902, thereafter becoming the librarian of Bedford College for Women, University of London between 1905 and 1907. She then returned to Sweden and served as the private secretary to the Vice-Chancellor of Karolinska Institutet from 1913 to 1921.

In 1918, Lamberg married Karl Ludvig Wåhlin (1861–1937). Wåhlin was an art critic and editor of Ord & Bild culture magazine (that he had founded). Anna often wrote for Ord & Bild, translated fiction (including Oscar Wilde's De Profundis) and academic essays. She died in 1949.

Anna Lambing left her position at the library in 1902, yet it wasn’t until the autumn semester 1917 that the next woman, Gurli Westergren (later Taube) was employed at the library.

By 1899, the library was open throughout the “working week” (Monday–Saturday), from 10 am to 2 pm during semesters. The organisation had 16 employees: a librarian (head of library), junior librarian, three assistant librarians, eight sub-librarians, two caretakers and an “employee of the government” (not paid using regular salary).